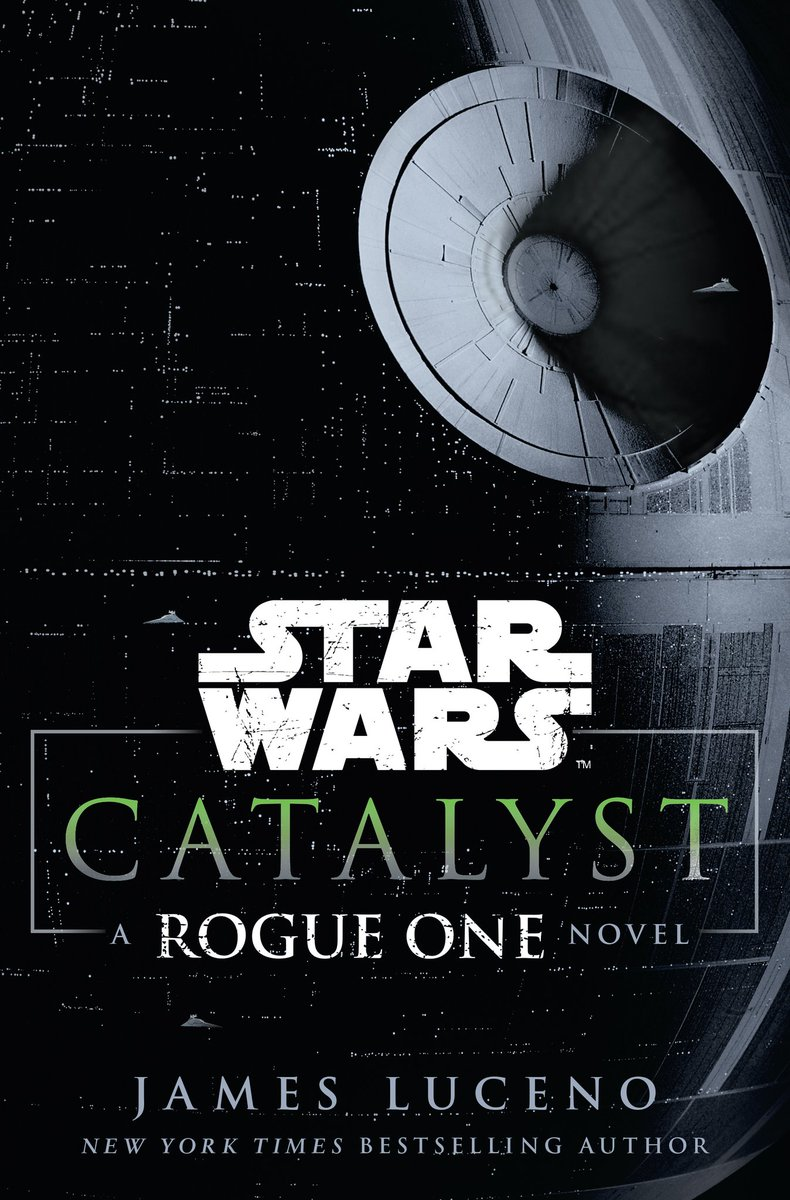 Catalyst is subtitled “A Rogue One Novel.” It is, in fact, a prequel to the film. The central character is Galen Erso, the father of Rogue One’s protagonist, and the story tells of how he and his family came to be in the position we find them in the film’s opening scenes.
Author James Luceno has done these kinds of prequel novels before for Star Wars: Cloak of Deception (for The Phantom Menace) and Labyrinth of Evil (for Revenge of the Sith). Both of those books were pretty good, and certainly were great supplements to their films. Catalyst, though, I liked more than these previous books. This was mostly due to it focusing almost entirely on non-combatants, which is a side of Star Wars which we don’t see enough of, quite frankly. Luceno takes advantage of the characters given him, developing both the Ersos and Orson Krennic to much greater degrees than was shown in Rogue One.

The novel’s timeline spans some four years. It opens during the later years of the Clone Wars, during which Galen Erso is working on the developing world of Vallt, doing research into producing power using synthetic attempts at replicating kyber crystals, an important component in Jedi lightsabers. He and his wife are expecting a child. Overall, they seem to be trying to ignore the war going on around them.

Their peaceful lives are disturbed when the Separatists take Vallt over and imprison them on false charges of espionage. Galen is offered freedom in exchange for working for the Separatist military, but, as a staunchly neutral pacifist, chooses to remain in prison.

Here the book shifts focus to Orson Krennic, a Lieutenant Commander in the Republic Corps of Engineers working on a secret weapons project. The Republic has intercepted Separatist plans of a massive battlestation bearing a planet-killing weapon, and is now covertly building their own. In a meeting with Vice Chancellor Mas Amedda, Krennic recommends that the Republic work to rescue Galen Erso, a former classmate of his from the Brentaal Futures Program, as his knowledge of crystals and their use in power supplies will be critical to getting the superlaser weapon to work properly. Amedda tells Krennic to go ahead with his plan.

Krennic hires smuggler Has Obitt to bring him and a squad of rangers to pose as emmisaries of Erso’s employer. The rescue is successful, retrieving Galen, Lyra, and their newborn daughter Jyn.

His rescue does not change Galen’s pacifist stance, however. When Krennic proposes that he work for the Republic military doing energy research, Erso refuses, even without knowing what the research would be used for. The Ersos sit out the rest of the war on Lokari, working for a telecommunications company to design crystal arrays to serve regions of the galaxy whose communications relays were destroyed in various battles

Meanwhile, Adjutant General Wilhuff Tarkin tasks Krennic with overseeing the production of the battlestation’s main weapon disc. Krennic elects to allow captured Separatist leader Poggle the Lesser’s hive on Geonosis to continue to work on the massive construction project, this time for the Republic. At first it seems that the Geonosians are simply happy to have work again, but Poggle ultimately betrays Krennic, destroying the work done and escaping back to Count Dooku’s protection. Tarkin decides that Krennic is not worthy of commanding the battlestation, but he keeps him in his position to take the fall for Geonosis and any future failures that may occur before the battlestation is completed.

The end of the war and the transformation of the Republic into the Empire offers Krennic new opportunities in recruiting Galen. He tells Galen that the Emperor shares his dream of unlimited power for all worlds. Erso is brought onto Project Celestial Power, a front for the development of the battlestation, now called the Death Star, which will be used to destroy the last remaining Separatist cells in the galaxy, along with anyone else who oppose Palpatine’s New Order. Erso doesn’t know of the Death Star, however, and takes the Empire at their word. He and his family move to Coruscant, where looted Jedi stashes of real kyber crystals await him.

With Poggle the Lesser killed by Darth Vader on Mustafar at the end of the Clone Wars, Geonosis is again put to work on the Death Star’s structure. Initially, the asteroid belt around the world is used as raw material, but this is soon depleted. The Empire turns back to Has Obitt for help.

Obitt is tasked with smuggling captured Separatist weapons to various Legacy Worlds, planets given similar protections as U.S. National Parks. Then, under pretense that Separatist cells exist on the worlds, the Empire will nationalize any mining operations on the worlds and close off travel to them.

Obitt eventually learns of the Empire’s doings on the worlds. Remorseful, he reaches out to Lyra Erso, whom he has been assigned to as a pilot for an expedition to Alpinn, a world which may hold untapped mines of kyber. They find that Empire has been strip mining the Legacy Worlds for metal ore, turning forests and oceans into wastelands and cesspools.

This discovery, as well as the sudden disappearance of several other scientists in Project Celestial Power whose work had been finished, makes Lyra very suspicious of Krennic and of the Project. Galen has also grown suspicious of the Empire and the secrecy surrounding the purportedly peaceful research. Eventually, they come to each other with their concerns, and decide to confront Krennic.

In the smuggler meeting house The Wanton Wellspring, Has Obitt meets Onderonian rebel leader Saw Gerrera. They form a plan together to warn the inhabitants of the Salient system, the next target of Obitt’s weapons smuggling, that the Empire means to take their worlds over.

Tarkin arrives on his Star Destroyer, the Executrix, to enact phase two of the plan. This time, however, the people there are prepared to resist his requests to land. They attack Tarkin and set about destroying any facilities useful to the Empire.

Tarkin refuses to retreat from Salient, and eventually does take the system. He also captures Obitt, deciding that he must have warned Salient under Krennic’s orders, as part of Krennic’s attempts to change Tarkin’s career. He agrees to release Obitt, in exchange for Obitt reporting on Krennic’s activities.

The Ersos have Krennic over for dinner, and confront him over what Project Celestial Power is truly about. Krennic does his best to assure them that their work is necessary to the Empire, and that their missing colleagues are sage. After leaving, however, he has Project security sent to detain the Ersos, who he correctly suspects are preparing to run away from Coruscant. Galen, Lyra, and Jyn escape before security comes, hiding in the crowds of a festival, leaving with Saw Gerrera, whom Obitt had sent toe their aid. They go into hiding on Lah’mu, and Outer Rim world where they will live as farmers.

Rogue One was a lot of fun to watch, with some really great cinematic sequences, particularly in the last third. But the nature of the film was such that many of the characters were not as explored as in typical for Star Wars films. Catalyst remedies this quite a bit for Galen Erso and Orson Krennic, whose characters are given much development and insight here. Wilhuff Tarkin also makes a strong showing in his scenes; this is really no surprise, as author James Luceno literally wrote the book on Tarkin for the new canon.

Luceno was a good pick to write this story. Of the regular group of Star Wars authors, he’s consistently been one of the best writers of Palpatine, even in stories wherein Palpatine is not a major character. In Catalyst, Palpatine never appears, never even directly interacts with any of the central characters off-page, and yet in every scene it is clear that “everything is going according to plan”. Seeing how the characters fit into this plan, or how they think they fit into this plan, is one of the best parts of this and several other Luceno novels.

Seeing the civilian side of Star Wars was another great part of the experience of reading Catalyst. As is indicated by the name, Star Wars is and likely always will be, in large part, about fighting and action, but it’s important to see what’s being fought for, and what is lost when the villains win, from time to time. Luceno greatly develops the world of science during the rise of the Empire here, and it’s a welcome addition to Star Wars lore.

My sole complaint is the title seems more like a random cool-sounding word than anything connected to the story within the cover.

If you’re a fan of Luceno’s other books, this is another good one. If you’re a fan of Rogue One who wants to see more of some of the characters, you should check this book out. If you mean to see Rogue One but haven’t still, I’d actually recommend reading this first, as it fills in a lot of backstory of the first scene’s characters. If you just want a good book to read in and of itself, I recommend this.

I didn’t really dislike any part of this novel that I can remember. I was surprised how much I liked it, actually, and I’ll probably be judging any future Star Wars novels I read based on how good this was, as I do with Timothy Zahn’s Outbound Flight. So, according to my scoring rubric, that means that Star Wars: Catalyst, a Rogue One Novel is the first thing to earn a 10/10 rating from The Edwards Edition.

10/10 — Superior quality. Shows great artistic merit and exceeds the reviewer’s expectations. Sets new standard for excellence in its field or genre. Recommended to all with greatest conviction.

Good, not great, but good. Treats the main character as a character, against the obvious direction such a show might take.
Mar 29, 2022
4 min read
Oct
13

Black Widow succeeds in showcasing the title character while telling its own compelling story. It's not the best MCU film, but it's exciting and never collapses under the weight of detailing a known character's backstory.
Oct 13, 2021
9 min read