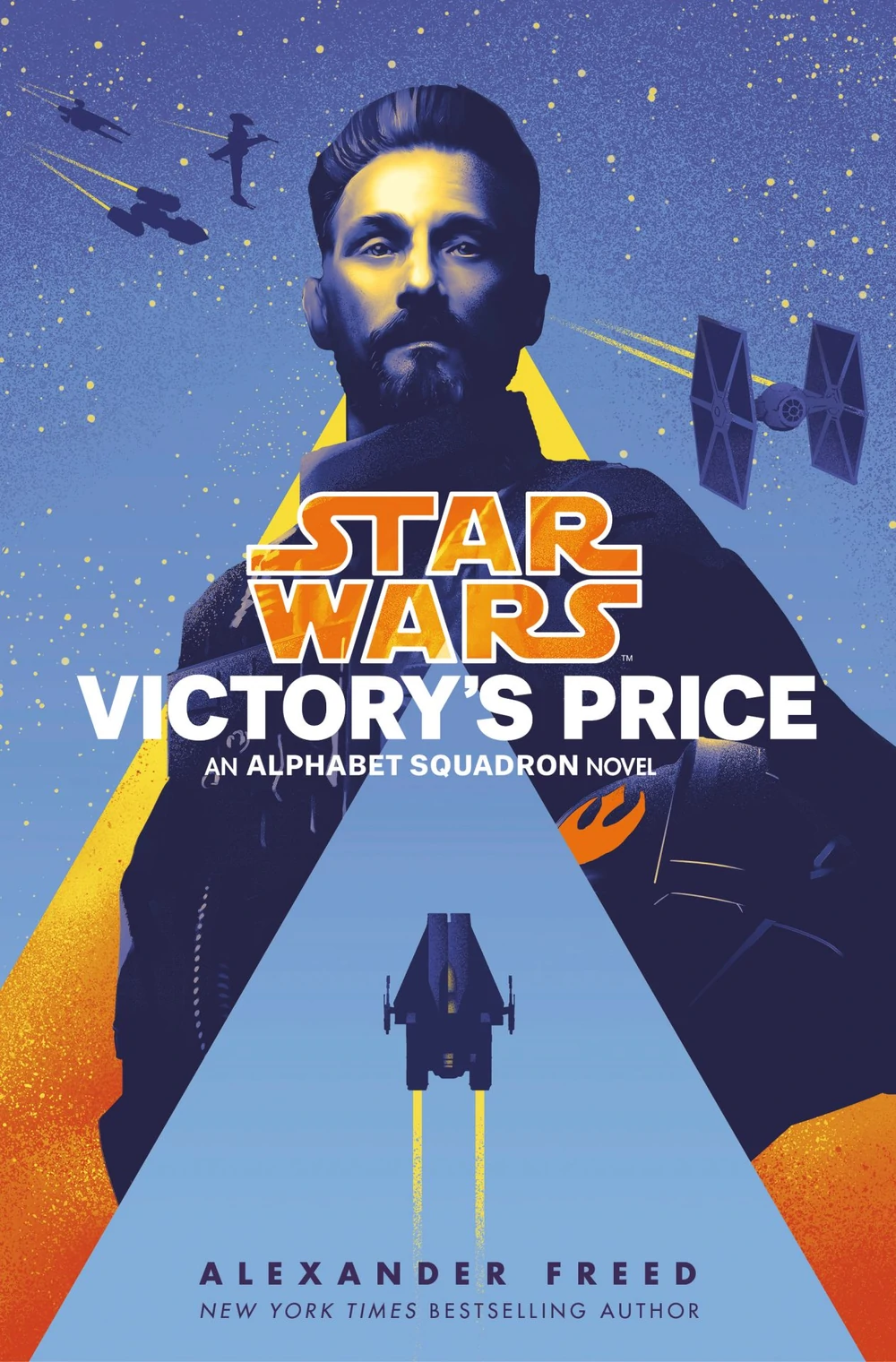 Victory's Price is the final installment of Alexander Freed's Alphabet Squadron trilogy. It tells of how the war against the Empire ended from the perspective of a cobbled together group of New Republic pilots, while exploring themes of justice, mercy, and the thorny path to peace. Freed's previous books were some of the best and most thoughtful in the new Canon, and this book is a worthy conclusion to the story.

The Analysis section discusses plot points of the book. If you haven’t read it yet, please skip ahead to the Recommendation & Rating section.

This book had quite the task set before it: it had to be a satisfying conclusion to a oft-times consciously unsatisfying trilogy of books. To end, as it does, with all the main characters alive and happy, for the most part, without the finale feeling like a disjointed bit of cheap schmaltz, is not an easy thing to do. But if we know anything about Alexander Freed by now, it's that he doesn't write stories the easy way.

This trilogy has featured no Jedi. It has only obliquely addressed the Force. In many ways, it could be set in any military sci-fi world. But these books are very Star Wars in one respect: their moral message. The Original Trilogy as well as many other beloved Star Wars stories are stories of redemption and forgiveness. The heroes of Star Wars, especially the Jedi, are shown as merciful and ready to lay down their weapons once a threat has been neutralized. The villains, by contrast, are often motivated by vengeance: the Sith plotted the destruction of the Jedi for a thousand years, the numerous Imperial warlords of the '90s era EU books fought a lost war against the accursed Rebels for I think fifteen years after Endor, and Maul wound up on his third or fourth all-consuming vengeance by the time he died, hoping that a new generation can get his vengeance for him. This is typically accepted on its face. Star Wars doesn't usually say why vengeance is evil, simply that it is evil. The Alphabet Squadron trilogy addresses the why.

In my reviews of the previous two books, I said that I thought Yrica Quell could be read as a picture of the galaxy at large. In the first book, she was making an attempt to transition from loyalty to the Empire to loyalty to the New Republic. In the second, she found the New Republic to be unworkable, and after a tremendous attack destroyed the New Republic's presence in her life, she returned to the Empire. Here, the metaphor continues: we find that she's still personally committed to the Empire's defeat, but she's unsure how to make that happen without support. In the end, though, the metaphor breaks down as Quell's story becomes more personal. She stops lying, to others and herself, and stops fighting for her own preservation above all else. And then she is forgiven for her crimes and goes free. She doesn't get to defect and have her past ignored because her new comrades are desperate for help, the way Nath was. She doesn't escape to some remote corner of the galaxy. She doesn't perform some great heroic act to redeem herself; that would be quite nearly impossible in her case. But she is forgiven, along with many other soldiers of the Empire, because the war is over.

In a conversation with Quell, Keize gives this assessment of the Empire's future:

"Imagine, Lieutenant, that we deliver a massive blow to the enemy fleet and suffer minimal losses to our own. Imagine the New Republic is forced to consolidate, leaving—what? A sliver of Imperial space in the Western Reaches, as the rebels might have secured if we’d reacted with unity after Endor?... ...Culturally. An Empire that survived this past year—an Empire that struggled, that carried out two Operation Cinders, that endured endless hardship to secure one wedge of the galaxy—does it rise to the heights we always aspired to? Is it a place of committed order and stability, even at the cost of certain liberties? Do its leaders value merit and honor—at least in words, if not in deeds?... ...We would become our worst selves—paranoid and violent, and dedicated to justifying that paranoia and violence,” Keize said, and together they began to reaffix the casing to the scanner array. “An Empire so ideologically feeble is no longer worth preserving."

You could see a similar discussion happening when considering the New Republic adopting Palpatine's police state apparatus to better destroy the Empire with. They could seek justice against every last Imperial war criminal, but it would come at the cost of becoming another rule-through-fear panopticon. That's not what so many Rebels fought and died for, any more than the post-Endor Empire was what the Imperials fought and died for.

It would be justice for Quell and so many others to be executed, but justice is not the path to peace; mercy is. Quell doesn't earn her freedom by her work with Alphabet Squadron or her fight against Keize. She is given it, to ensure that the rest of the Empire will surrender and accept defeat, but also to ensure that the New Republic is not founded on an act of retribution and hatred, however justified. Instead Mothma's first act as galactic leader is one of mercy, dispelling the fear that fed the Empire's darkness, and the anger that fed the Rebellion's. In the final pages, Quell once again is a picture of the galaxy, living at peace.

As in his previous books, Freed writes aerospatial battles masterfully. Each battleground (battlesky?) is uniquely characterized; Freed never just sets his battles in empty void, rather, he takes advantage of the wide range of environments that might be found in outer space or the atmosphere of alien planets. The actions of pilots, the movement of opposing forces, and the objectives of each strike is clearly told through the vividly described chaos. I don't generally give space action in books much thought, since I can't see it and thus don't really expect to be dazzled. The fact that Freed did, and wrote each scene so well, deserves real praise.

Kairos finally came into her own as a character here. I know Freed has said that she was written very vaguely because he didn't have much of an idea for who the U-Wing pilot would be. That's still the case here, but in Victory's Price she's a fascinating presence rather than a forgettable placeholder. You get the feeling here that she is a person with just as deep a story as Quell or Tensent or Chadic, albeit one less comprehensible to a human audience. It's good, truly alien sci-fi stuff of the sort rarely enough seen in Star Wars.

The one thing that didn't work was Quell and Chadic ending up together. I know there was a time-jump, which leaves some room for an untold story, but I didn't buy it. Chadic truly hated Quell, and we never saw that change.

I could go into more detail about this book, for completion's sake. But all I could really do is re-cap their scenes and say they were presented well. This book, this trilogy, is the best thing to come out of Star Wars in some time. You should read it. It's well worth your time, even if you aren't much of a Star Wars fan.

9/10 — Flawless. Meets all of the reviewer’s expectations. Worth arguing a person into experiencing.