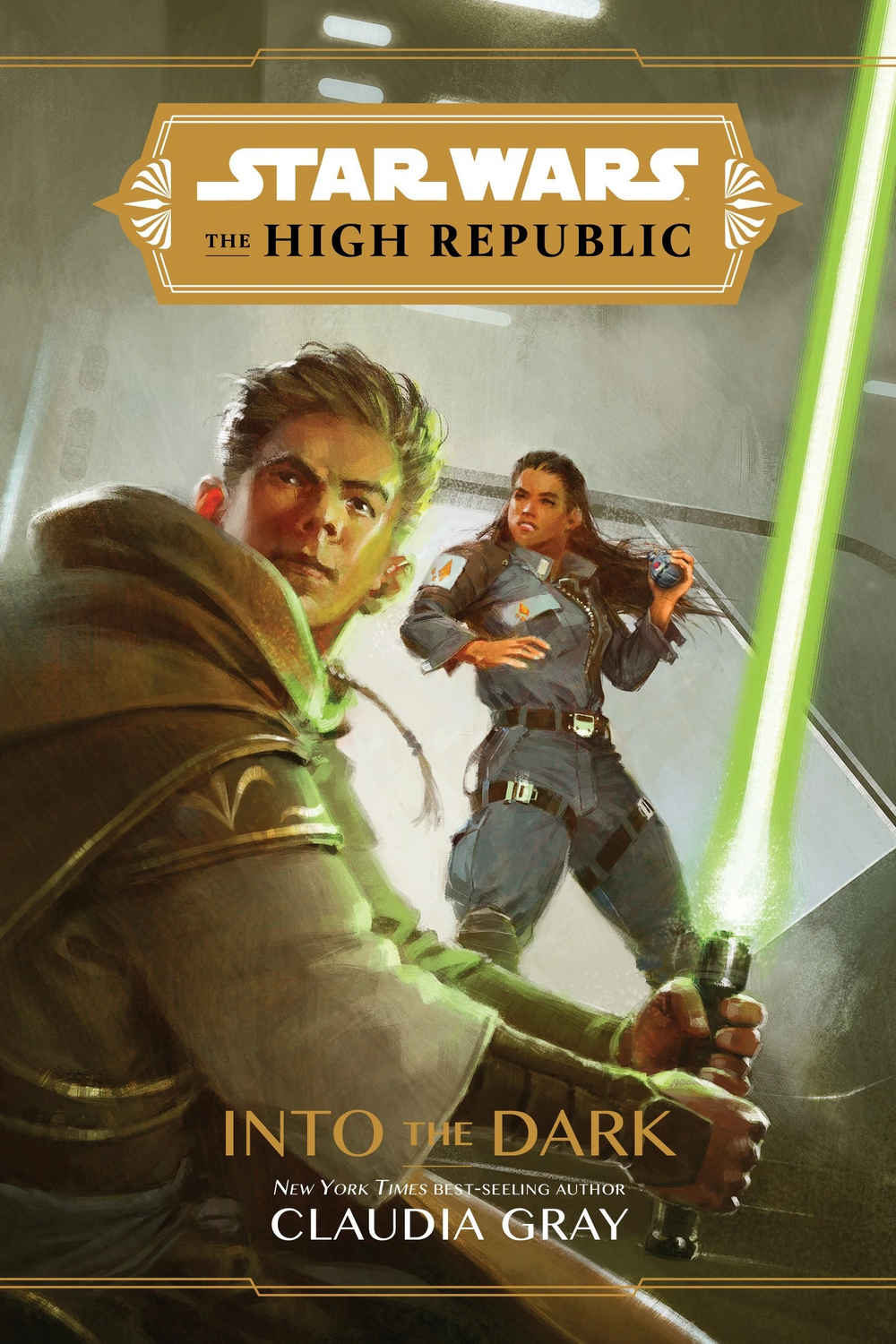 Into the Dark is the third book and first YA novel in the Star Wars: The High Republic publishing initiative. It was written by Claudia Gray, who, looking back at my archives, I've never covered. That's a real shame, because she's one of the best writers Star Wars has at the moment. She wrote Bloodlines, which was excellent, and Master & Apprentice, which was also really good, and Lost Stars, which I haven't read but have heard nothing but effusive praise for. So it's no surprise that she was tapped to write for The High Republic. Here, she brings a lot of what I thought was missing in Light of the Jedi, and a generally well-written story set during the Great Hyperspace Disaster.

Jedi Padawan Reath Silas is dismayed to learn that he will be travelling away from the Jedi Temple, and the Jedi Archives he so loves studying in, as his master, Jora Malli, has been placed in charge of the Jedi presence on Starlight Beacon. Malli has travelled on ahead while Reath has been finishing exams. Once he has completed his studies, Reath travels with several other Jedi (a maverick Knight, a wide-travelling folklorist, and Malli's previous apprentice) to reunite with his master in the Outer Rim. They travel aboard a hired transport from the Byne Guild's fleet, the simply-named Vessel. The ship's captain is Leox Gyasi, an odd, hippie-ish fellow. The other members of the crew are Affie Hollow, adopted daughter of  the shipping guild's leader, Scover Byne, and a large slab of rock called Geode, who doesn't appear to do anything but whom Gyasi assures the Jedi is the ship's navigator.

The Vessel is en-route to Starlight Beacon when the Legacy Run is destroyed and scatters debris through hyperspace (as detailed in Light of the Jedi). Gyasi is forced to drop back to realspace, as have all other starships in the Outer Rim. The Jedi take charge of coordinating the rendezvous of several nearby stranded craft at an abandoned space station not far from where they all dropped out of hyperspace. The station is still operational, apparently in semifrequent use as a stop-over for smugglers. Reath recognizes it as being originally constructed by an ancient civilization, the Amaxines, a warrior people who were said to have left the galaxy long ago on a quest to find more worlds to conquer. Their station is found to be the home to an overgrown terrarium, filled with plants still tended to by busy, protective gardener droids.

The Jedi struggle to keep peace between the various groups gathered at the Amaxine station, as they know little yet about the people in this region of the galaxy. Reath befriends a girl named Nan, who was travelling aboard a cobbled-together ship with an older man named Hague. Nan says that Hague has cared for her since her parents died, hinting that they died in battle and that she and Hague belong to a rather martial society. She asks Reath about the Jedi.

Orla Jareni (the maverick knight, who recently declared a functional independence from the Jedi Council's edicts) and Cohmac Vitus (the folklorist) encounter a set of statues, apparently idols, among the garden. The Jedi sense a deep darkness around the statues; believing they might be Sith artifacts, they resolve to bring the statues back to Coruscant for study as soon as they are able.

Affie wanders the station, finding some sort of coded messages left scrawled on the walls by smugglers. Among the strange symbols she finds the emblem of the Byne guild, which piques her interest enough for her to make a record of the graffiti to study later.

Reath and Dez Rydan (Malli's previous apprentice) go exploring the lower levels of the station, where Dez falls and is seemingly vaporized by unguarded power systems. Vitus ascribes this misfortune to the Dark Side presence on the station.

Once they are able, the Jedi and the Vessel return to Coruscant. Reath receives the bad news that Master Malli has died in battle with the Nihil. From descriptions given of the new threat, Reath identifies Nan and Hague as Nihil, and worries that the Nihil will take the Amaxine station. Jareni and Vitus examine the idols, finding that the dark energy they sensed in them has disappeared. Vitus fears that they have made a mistake, that the idols were not the source of the darkness aboard the station, but a containment for it. Affie researches the markings she found, determining that they were left by indentured pilots employed by the Byne Guild. Affie was unaware that Byne used indentured workers; a covert investigation into private guild records indicates that her own parents were indentured to Byne, and that they died while on a mission to the Amaxine station.

Reath, Affie, Jareni, and Vitus all thus have reason to return to the Amaxine station. They return aboard the Vessel, stealthily docking to attention from a contingent of Nihil who have arrived to take the station. The elder Jedi return the idols to where they found them. Affie returns to the graffitied room to search for more evidence of Byne's abuse of indentured crew. Reath returns to where Dez fell, where he himself is trapped in a small pod that is flung through hyperspace. He emerges on a strange planet home to a race of homicidally carnivorous plants, the Drengir. They have captured Dez, and have poisoned him in an attempt to learn where he came from. Dez, heavily drugged and illucid, attacks Reath, though Reath is able to jog Dez's memories. The two young Jedi return aboard a hyperspace pod, destroying the Drengir's pursuing pod before the evil plants can disembark aboard the Amaxine station.

Jareni and Vitus discover Drengir of their own. The terrarium was not a garden, but a prison. Vitus determines that the ancient Sith had imprisoned Drengir aboard the derelict station centuries ago, sealing them in an unconscious state using the idols. The Jedi, faced with incurring Nihil, decide to leave the Drengir loose, allowing their two enemies to fight between themselves. Reath sends the Amaxine hyperspace pods out into deep space, to prevent either faction from gaining use of them. He is nearly sucked into space himself, but he is caught by a handily placed Geode.

Once again returning to Coruscant, the Jedi deal with the aftermath of their experiences in various ways. Dez takes a vow to spend years in meditation to re-establish a proper connection the Force following his torture by the Drengir. Jareni formalizes her independence from the Council. Reath requests that Vitus take him on as a Padawan to complete his training; Vitus agrees to do so, saying that teaching Reath will be a great learning experience.

Affie Hollow, despite her love of her adopted mother, turns Scover Byne in to the Republic authorities for illegal treatment of indentured workers. With the Byne Guild legally dissolved, ownership of the Vessel falls to Gyasi, though he insists the true owner is Affie. The *Vessel'*s crew sets out as independent operators.

This book was, as I mentioned, released as a Young Adult novel, which, in Star Wars at least, generally just means that some of the protagonists are in their late teens to early twenties. It's a distinction that I've always found confusing, since a lot of Star Wars has young adult characters, including every Star Wars film. I'm sure somehow this means the books make more money.

Anyway, as I said I found a lot of what I thought was missing in Light of the Jedi here in Into the Dark. Namely, this book had really well-realized characters. Every named character is a unique, memorable presence, and I'd gladly read more about them (as I'm sure I will, eventually.) That's to be expected, certainly, from Claudia Gray, but it's still worth mentioning and praising.

Additionally, this book featured a lot less black-hat vs. white-hat battles and a lot more conflict between decent people who are, in the grand scheme of things, on the same side. This is hard to do without devolving into nihilistic gray morality, but it's an important factor if you want your story to seem realistic and interesting. With the Nihil in the background, and the Drengrir held off until the end, as a surprise, most of the conflict arises from the characters being different people with different goals and perspectives. See, good characters aren't just decorative; they're foundational to a good story.

If I have a complaint, it's that Reath's story of leaving his bookwormish comfort zone, Affie's story of investigating her foster mother's crimes, and the other Jedi's story of discovering the idols don't ever seem to come together. Affie, particularly, seems to be merely present in scenes focused on the Jedi. Compounding this is an interspersed set of flashback scenes about Vitus and Jareni as padawans which, while informing those characters, never tied into the story in the present in any way I can recall. This book has many plot threads, but they never weave together into something more.

So far, the High Republic stories have felt like the first chapters of something. Something good, but something that still isn't complete. Light of the Jedi and now this book both end with sequel teases, and there's no resolution to anything but the immediate crises. Still, Into the Dark is a well-told story about the Jedi at their peak, which is what the High Republic era promises. I'd recommend it even if you haven't read the earlier books.

8/10 — Without significant negative worth. Able to be recommended, at full price, without reservation.

If you read Alphabet Squadron and liked it, go ahead and read this one too. It builds from the same themes as that last book, and goes in some interesting directions, setting up the next book to be, hopefully, something pretty good as well.